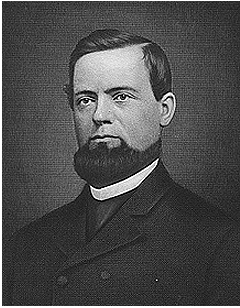 Evan Pugh, the first president of Penn State, completed his doctorate at the University of Göttingen in 1856, having passed examinations in both chemistry and physics and submitted a thesis in chemistry. Upon arriving at Penn State in 1859, he immediately established a laboratory: As an academic he was profoundly influenced by the German model, and had noted that "no German teacher contents himself with merely attending to his classes, and sitting down at ease after he has got them at work. He is studying constantly himself; making original investigations and publishing them to the world."

Penn State's first graduate students earned degrees in 1863 under Pugh's direction. Alfred Smith (who became professor of chemistry at Penn State) and Augustus King (the son of the president of Columbia University) were awarded the Master of Scientific Agriculture degree which, according to the 1861 course catalog, was a postbaccalaureate degree earned by a year of "special investigations" (Bezilla 1987). Between then and the establishment of the Graduate School in 1922, nearly 900 postbaccalaureate students undertook graduate study at Penn State (although not all earned degrees). During these years, as it was for Evan Pugh in Gottingen, graduate study remained an independent pursuit, shaped by the individual student's and advisor's interests. No formal graduate classes were offered; not until the establishment of college-wide standards in the 1890s, was a thesis uniformly required for all advanced degrees.

In 1922, President John Thomas established the Graduate School under the direction of Dean Frank D. Kern (who was at the time also head of the department of botany). Thomas was convinced that "a state university must have a strong and diverse line of graduate offerings," that the Graduate School "would stand as a symbol that Penn State recognized that higher education did not end with the baccalaureate degree" (Bezilla 1985). The Graduate School made available a small number of graduate teaching assistantships, each with an $800 per year stipend, as well as a fellowship sponsored by the Elliot Company, an electrical engineering firm in Pittsburgh. In the first eight years of the Graduate School, graduate students earned 422 advanced degrees: 15 Ph.D.s, 147 M.A.s, 208 M.S.s, and 52 technical degrees.

Text by Research Publications, Office of the Vice President for Research.

This page was generated on May 26, 2022 at 4:32 PM Eastern Time. This may not be the most recent version. Check the website for updates.